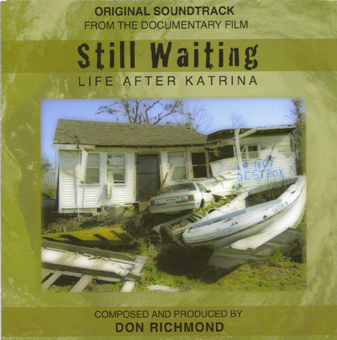 This CD features music from the soundtrack of the documentary film, "Still Waiting: Life after Katrina" that aired on PBS stations across the US in late 2007. The Film is a powerful piece of work detailing the lives of a large extended family forced to leave their homes when hurricane Katrina hit the New Orleans area and their struggle to return home and rebuild their lives. The music was primarily written and recorded by Don Richmond and also features several local and regional musicians - Aaron Lewis on saxes and clarinet, Corliss Taylor-Dunn on vocals, Creed de Avanzar on vocals and percussion, Matt Schildt on piano, James Doyle on drums and Johnny Watson on vocals. Don contributes tracks on acoustic and electric guitar, mandolin, violin, Weissenborn slide guitar, bass, dobro, organ, trumpets, baritone horn, piano and accordion. There are also three cuts on the CD recorded on location in Plaquemines Parish, Louisiana featuring the Bethlehem United Mass Choir.